As much as I enjoyed the spectacle of this self-hating Jew making a fool of himself, this clip needs some corrections.
1) The word eruv most definitely does not translate as “loophole.” The meaning of the word is mixture, an amalgamation of courtyards.
2) Once and for all, I would like to put to rest the claim that an eruv is a loophole, a circumvention of Biblical law (not that it is anyone’s business if our rabbis maintain that they can create loopholes). In a Biblically proscribed domain, an eruv would not be effective (what is classified as a Biblically forbidden area is a matter of considerable debate). In order that one would not come to carry in a Biblically proscribed domain, the rabbis prohibited carrying in other domains, as well. However, the rabbis allowed one to carry in rabbinically proscribed domains if there was an eruv. In other words, it was the rabbis who proscribed carrying and it was the rabbis who permitted carrying in non-Biblical domains.
at March 29, 2011 No comments: Links to this post

A Purim Line From the Past

I am thrilled to be able to share with you a rare find! This poem was sent as a Purim greeting, urging recipients to donate funds for the upkeep of the eruv of Lublin in 1899. Notice the acrostic in the poem which reads “Purim Tikun Eruvin.” 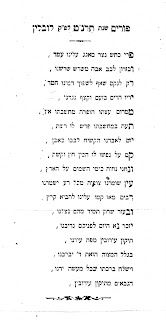 Courtesy of The Library of The Jewish Theological Seminary

Eruvin in the News: Plano, TX

The Plano City Council has agreed to allow Orthodox Jewish residents to create a symbolic sacred area within the city, which would allow them to honor their religious customs more easily.

The council unanimously approved a ceremonial lease agreement for the Plano Eruv District at Monday’s regular meeting. The established area will allow practitioners to carry, transport or push objects normally prohibited on the Sabbath and other Jewish holy days. Read on...