The following story is about a pogrom in the town of Kalish, Poland in 1878. The rav of the town of Kalish at that time was Harav Chaim Elazar Wachs zt”l (1822-1889), the world renowned author of the Nefesh Chayah. He had been the rav of Tarnogrod from 1842 to 1862 and then was rav in Kalish until 1881; he then served as rav in Pietrkow in 1884. The account of the pogrom below appeared in Dos Kalisher Leben 2, July 29, 1927 (see facsimile below). This translation is from The Kalish Book, 1968. For further reading on Harav Chaim Elazar Wachs see Shem V’She'eris LeNefesh Chayah, 1961. 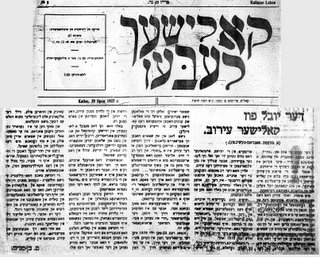 The Story of a Pogrom

The eruv we have in our town is now all that it should be according to Jewish law and practice; and it is almost always in proper order. This is due to the watchful activities of three or four people who constitute a Committee for the purpose. But in the past the eruv led to bitter quarrel between Jews and Christians. On the Jubilee of the eruv, let us record what happened then.

Fifty years ago the Rabbi of Kalish was the scholarly gaon Reb Chaiam Elazar Wachs, who was honored and esteemed by all. One of the matters to which he devoted himself was the establishment of the eruv in town. Dozens of meetings were held in connection with this. Everybody wanted to help the Rabbi somehow in his holy task, but the poverty of the community caused the matter to be deferred for a very long time. However, at last the actual construction of the eruv began. The Rabbi himself supervised the execution. When no more pillars were available, the Rabbi called on the wood merchants who responded favorably.

Work continued for months. The eruv was stretched round the urban area as it then existed: From the “Rogatka” as it was then called, beside the Christian Hospital as far as the Bridges across the Stawiszin and Turek Streets. It was completed about Midsummer 1878.

In those days the Russian Authorities tried to frighten the Poles away from politics. Those, after all, were the years following the Second Polish Revolt. So they decided to exploit the eruv for their own base purposes.

Within a few days the rumor spread among the Polish population that the eruv was a piece of witchcraft. The rumor was spread by Russian agents. Reb Chaim Elazar Wachs, they claimed, had surrounded the whole city with an iron wire so as to bring the entire Christian population within the field of operation of the witchcraft. Oil was poured onto this fire of incitement against the Jews by the evidence of the wife of the Christian physician Remarkevitz, who claimed that she had seen Jews throwing stones at a passing Christen woman. The doctor’s wife was telling the truth, but this was a Russian provocation. The supposed Jew was a disguised Russian provocateur.

On Sunday, July 3rd, 1878, when the Christens went to Church, the priests delivered sermons of incitement against the Jews, particularly the Rabbi, and the eruv served as the excuse. When the Christens left the Church they proceeded to the Jewish Quarter in masses and began rioting.

They began thrashing every Jew who came their way; they pillaged Jewish property and wrought destruction in the Synagogue and Jewish Hospital. When they finished all this they gathered around the home of the Rabbi. Here, however, they met with the effective resistance of the House of Study students, headed by Tratel Green the Butcher. The crowds had to withdraw.

Three Jewish children were killed in these riots, while many grown-ups were injured defending life, limb and property. It was estimated that goods to a value of more than 100,000 rubles were looted and stolen.

The Russian Authorities in Kalish, who had planned and executed this fine piece of work, were very satisfied at the results, but concealed the whole incident from the knowledge of the Colonel of Hussars, who was a liberal and would undoubtedly have protested against the whole proceeding. And sure enough, as soon as he learned about the Pogrom he came to the town at the head of his Regiment and put an end to the dreadful game. At his order the Hussars placed many cheder children on their saddles to save them from the crazed crowds and fetch them to their homes.

Against their will the Russian Authorities had to approve of his actions and follow through in his humane measures. They imposed a fine of 120,000 rubles on the Christian population of Kalish and the vicinity.

However, the late Reb Chaim Elazar had to resign his rabbinical office in Kalish an account of the incident [note - this is incorrect, see below]. That was the beginning and the end of the Eruv Pogrom in Kalish fifty years ago.
_________________________________________________
Harav Chaim Elazar Wachs zt”l did not leave Kalish because of the pogrom, but about a year later. [The reason that he left Kalish is mentioned in Shem V’She'eris LeNefesh Chayah, p. 26.] This factual error in the jubilee article in the Dos Kalisher Leben is understandable since this misinformation was already published in the enlightened Jewish newspapers at the time such as the Allgemeine Zeitung des Judenthums, Berlin (July 16, 1878 number 29 p. 458) and HaMelitz (August 21, 1878 p. 124). The Maskilem took advantage of this opportunity to ridicule the Jewish custom of eruvin (more about this in a future post). News of the pogrom spread like wildfire and European newspaper accounts reached American shores. Inevitably, erroneous information was just repeated.