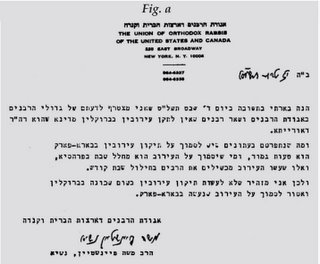 Furthermore, it is not plausible that Rav Moshe would have stated in this 1981 letter that, “those who rely on the eruv are considered a mechalel Shabbos.” We see he was uncomfortable with a comparable line that was utilized in the 1962 takanah against erecting an eruv in Manhattan since he omitted it from his teshuvah (Igros Moshe, Addendum to O.C. 4:89). Additionally, the subsequent line, “and those who erected the eruv are causing the rabbim to falter,” is questionable as well because three years earlier in his teshuvah (ibid., 4:87) to the rabbanim of Flatbush not only did Rav Moshe not censure them, he declined to issue a p’sak and acknowledged that the Aruch HaShulchan and other Achronim would disagree with him. In light of the aforementioned, Rav Menashe Klein shlita wrote (Oim Ani Chomah, siman 53) that there were Roshei Yeshivos who declared publicly that Rav Moshe never signed this letter. Moreover, it is interesting that only the date and the signature are handwritten on this flyer. [Although many people have asked to see the handwritten letter in its entirety, it has never been forthcoming.] Additionally, the signature on this letter is indistinguishable from the one on the haskamah to a booklet against erecting eruvin, and it’s impossible for two signatures to be exactly the same [Figs. b and c]. Furthermore, as this letter was typed on a manual typewriter almost twenty-five years ago, before one had the ability to type a letter with different font sizes, the two different sizes of type in this letter − Rav Moshe’s name as it was typed under his signature is smaller in size than the rest of this letter − strongly suggests that, in all likelihood, Rav Moshe’s signature was transferred from elsewhere. In light of the aforementioned inconsistencies in this letter, it follows that one can only be confident in what Rav Moshe actually stated in his teshuvos and not in what is merely written on a flyer.
l

It is important to note that all the objections to eruvin in Brooklyn are based on this 1981 letter and the 1979 kol korei (see The 1979 Flatbush Kol Korei Exposed), and as we have shown above, both are spurious documents and cannot be relied on. Finally, even if Hagaon Harav Moshe Feinstein zt”l had signed this letter and the signature on the 1979 kol korei was authentic, since Rav Moshe’s opposition to these eruvin was based on a totally different set of circumstances which does not pertain to us today, there is no question that he would have allowed our eruvin.
at January 05, 2006