There has been much confusion disseminated on the topic of Rav Henkin’s position regarding an eruv in Manhattan and Brooklyn. Because of Rav Henkin’s stature as one of the preeminent poskim in America, the significance of his position cannot be underestimated. It is therefore understandable that the anti-eruv camp would try to deceive the public into believing that he was opposed to an eruv in New York. In the following post, I will set out Rav Henkin’s positions as they appeared in print.

Rav Henkin’s first mention of a Manhattan eruv was in 1936 (Luach HaYovel Shel Esras Torah, p. 62). He declared that Rav Yehoshua Seigel zt”l’s eruv of 1905 could no longer be relied on because Rav Seigel had only enacted sechiras reshus for ten years. However, the main reason Rav Henkin asserted that the eruv is problematic was because of the establishment of bridges that negated Manhattan’s waterfront. This letter was later reprinted in Edus L’Yisroel, 1949 [1] (p. 151) where Rav Henkin added a paragraph in which he stated that although someone mentioned to him that most of the bridges in fact comprise an integral tzuras hapesach, he refutes this claim (see note 3). He added that there is an additional matter of asu rabbim u’mevatlei mechitzta since the borough of Manhattan contains shishim ribo. However, he admitted that Rav Seigel had already paskend regarding this issue [that we do not say asu rabbim because Manhattan is encompassed by mechitzos and that the shishim ribo would need to traverse the street itself] (Oznai Yehoshua, siman 18).[2]

In 1949, the Amshinover rebbe zt”l urged Rav Tzvi Eisenstadt zt”l to establish an eruv that included the whole Manhattan. In 1959, the Shotzer rebbe, Rav Yosef Dovid Moskowitz zt”l, published his sefer Kuntres Tikkun Eruvin Manhattan with a haskamah from Rav Henkin (November 24, 1958). The Shotzer rebbe mentions (Kuntres Tikkun Eruvin Manhattan, p. 45) that he investigated the Manhattan waterfront and its bridges in 1954 and again in 1959 and found that they were enclosed with tzuras hapesachim. However, Rav Henkin stated in his haskamah that he was still not clear regarding the validity of these tzuras hapesachim. Half a year later (March 26, 1959), at a meeting in Rav Henkin’s house regarding the issue of the Manhattan eruv (Divrei Menachem, O.C. vol. 2, p. 38), the bridges and tunnels were discussed and it was agreed upon that they were sufficiently enclosed. By March 15, 1960, Rav Henkin signed on a kol korei of the Vaad L’Maan Tikkun Eruvin B’Manhattan (ibid., p. 10; see below) that stated the need to investigate how to bring to fruition the plan for a Manhattan eruv. On November 3, 1960, Rav Henkin wrote a letter to Rav Menachem Kasher zt”l (ibid., p. 14) stating that while he agreed with the rabbanim who supported an eruv regarding certain points, he still had some doubts regarding other issues, particularly if all the pirtzos were closed. He went on to say that one could rely on the rabbanim who suppored the eruv and particularly on the Shotzer rebbe who expounded on the [heter for the] bridges and tunnels.[3] Rav Henkin then stated that he couldn’t pasken for the whole city, which contained many great rabbanim until there was some consensus on the issue. He reiterated that the main point was that the pirtzos should be built up, and that there should be a person in charge of making sure that the pirtzos are closed. In a following letter to Rav Kasher (ibid., pp. 14, 135), Rav Henkin stated that since there were many rabbanim in Manhattan, he was not the person in charge of this matter. He continued that he would follow Rav Moshe Feinstein’s lead and not join those who supported an eruv, but he would also not object to those who allowed one.

On July 12, 1961, Rav Henkin wrote his final letter regarding eruvin to the Vaad L’Tikkun Eruvin B’Manhattan (ibid., pp. 14-15; Hapardes 36th year, vol. 4, and Kisvei Hagriah Henkin, pp. 32-33). He stated that there was a sound basis to establish an eruv in Manhattan and that the borough was no different than other cities that had erected eruvin and was even superior to them [because of its mechitzos]. He continued that the Vaad was comprised of prominent rabbanim, admorim and baal habattim, under the auspices of Rav Kasher, Rav Eisenstadt and the Shotzer rebbe, who were all working on obtaining the support of other rabbanim after which they would call a meeting of the rabbanim to conclude the matter of establishing the eruv. Rav Henkin declared that it was his belief that they should not wait until this meeting of the rabbanim to proceed, because from experience, he knew that it would take a great deal of time until it would come together, and it was a pity to wait so long. Rav Henkin recommended that instead they should immediately rectify what needed to be corrected and then publicize that there were rabbanim who were responsible for the kashrus of the eruv. However, until the Vaad would receive the written support of most of the rabbanim of Manhattan, the heter for the eruv would only be for times of great need. On the other hand, once they had garnered the necessary support from most of the rabbanim, they could publicize that the heter was for all. Rav Henkin gave some examples of what he considered a great need; Women and children who felt a need to leave their apartments on Shabbos, particularly during the summer, doctors who needed to carry for a choleh shain bo sakana, the need to carry on Shabbos that falls on Succos. Rav Henkin added, among other things, that the Vaad should place advertisements in the newspapers stating that only the borough of Manhattan is included in this eruv. The Vaad should establish a fund to pay the salaries of two masgichim, and that the rabbanim should expedite the establishment of mechitzos for the boroughs of Brooklyn, Bronx, and Queens, since they do not have a general eruv. He also suggested that the Vaad designate two talmidei chachamim who are experts in hilchos eruvin to answer people’s questions regarding eruvei chatzeiros in the other boroughs.

It’s important to note that besides for what is stated above, Rav Henkin’s grandson has mentioned as well that he was supportive of an eruv in Manhattan (see the comment to this post Flatbush Eruv on Hirhurim here).

From Rav Rav Henkin’s final letter we see that he supported an eruv in Manhattan and Brooklyn (and all the boroughs). Additionally, it is important to note that in the end, his final issue was not regarding the halachic feasibility of erecting an eruv but only that there should be some consensus. The next post regarding Rav Henkin and a New York eruv will address the claims made by the anti-eruv group. 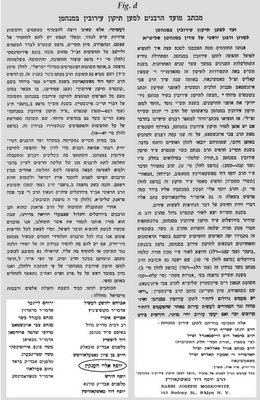 [1] The date of the publishing of Edus L’Yisroel is unclear. JNUL claims a date of 1949, but in Kisvei Hagriah Henkin (1981) they maintain 1946 (see the hakdamah) or 1952 (see title page). JNUL probably relied on the fact that there is a letter dated 1949 from Rav Yitzchok Isaac HaLevi Hertzog zt"l (p. 19) therein. Nevertheless, this only gives us the earliest date it could have been published by. However, I found that the copy of Edus L’Yisroel in the New York Public Library had an acquisition stamp dated 1949. An additional proof that Edus L’Yisroel was published sometime in 1949 is that the luach printed in the back starts from 1950.
[2] It is important to note that Rav Henkin referred to Rav Seigel’s sefer Oznai Yehoshua and not Eruv V’Hotzaah because the former deals with the issue of Manhattan being a reshus harabbim whereas the latter mainly deals with the matter of being able to carry in Manhattan (more about this issue when I detail the history of the first Manhattan eruv).
[3] With this letter (1960), Rav Henkin came full circle from the time he wrote in Luach HaYovel Shel Esras Torah (1936) that the bridges were problematic. In this letter, he allowed that one could rely on the Shotzer rebbe who described in detail the tzuras hapesachim that closed the bridges. Since the Shotzer rebbe did not actually build tzuras hapesachim, but utilized the integral tzuras hapesachim of the bridges themselves, the integrity of the bridges was never really an issue to begin with, and these bridges were sufficiently closed. In essence this meant that when someone mentioned to Rav Henkin in 1949 (Edus L’Yisroel, p. 151) that most of the bridges comprise of an integral tzuras hapesach this in fact was correct, and those who carried when the Third Avenue El was standing (until 1955; see Part 1: The Truth About the Satmar Rebbe and a Williamsburg Eruv) were, besides for the issue of sechiras reshus, actually using a kosher eruv (more about this issue when I detail the history of the first Manhattan eruv). [It’s important to note, as mentioned above, that by 1949 there was a movement to establish an eruv for the whole Manhattan.]
at July 24, 2006