The Earliest Reference to Carrying on Shabbos in New York City

Writing in his memoirs, Judah David Eisenstein mentioned a debate regarding traveling on the elevated trains on Shabbos in New York circa 1878 (Ozar Zikhronothai, p. 352). He states that those who allowed traveling on Shabbos if the tickets were bought in advance maintained that since the trains were elevated more then ten tefachim it was as if one was traveling in a reshus hayachid. However, Rav Avrahom Yoseph Asch zt”l (1821-1887) declared that it was prohibited because of maris ayin and uvda d’chol. Nevertheless, if one was traveling on behalf of the community for a great need or on behalf of a mitzvah Rav Asch would allow it covertly (I will IY”H have more to say about Rav Asch ― the most important rav of American Orthodox Jewry at the time ― when I post the complete history of the New York City eruv of 1905).

The date and account given by Eisenstein is inaccurate. To the contrary, I found a published statement from Rav Asch regarding this matter in the Yudishe Gazeten of August 19, 1881 (see below). The account relates how some weeks prior, a rav from New York finagled a heter from Rav Yitzchak Elchanan Spektor (1817-1896) to travel on Shabbos on the elevated trains. Rav Spektor wrote Rav Asch a letter relaying the sequence of events. He stated that this New York rav had warned him in a letter that if a heter to travel with the locomotives on Shabbos was not found the fundamentals of yiddishkeit could disintegrate. Additionally, this rav mentioned that Rav Yoseph Saul Nathanson (1810-1875) allowed carrying in New York City on Shabbos. Therefore, Rav Spektor wrote, taking the above into account, he allowed traveling on the train providing that the tickets were bought prior to Shabbos, the traveling was within the techum Shabbos, and that the traveling was on behalf of a mitzvah. Rav Asch wrote that after he had informed Rav Spektor that as this would not cause the collapse of yiddishkeit and there was no heter to carry in New York, there is no heter on Shabbos to travel on the trains at all. Consequently, it is clear that Eisenstein is mistaken that Rav Asch would allow traveling on Shabbos on the train as long as it was not done overtly and it was on behalf of a mitzvah.
(For further reading on the subject of riding the train on Shabbos see the sources cited in Yechaves Daas, 3:36; see also the following teshuvos which are not quoted therein, Tahaluchos HaYabashah, 103-4; Tahaluchos HaMayim, siman 283-4; Imrei Shabbos: Kovetz Tel Talpios, 1934, ois 58: Kovetz HaMasif, 2:203; Bais Yitzchok, Y.D. 2:31 Addendum; Malkei BaKodesh, vol. 5 p. 19, and Minchas Yitzchak, 2:106:18.) 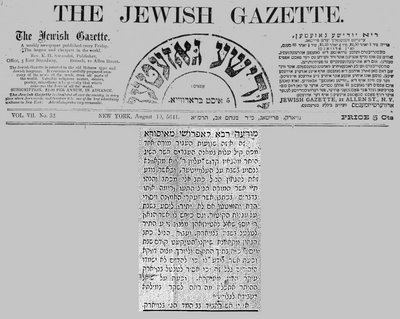 Facsimile of the Yudishe Gazeten of August 19, 1881 discussing the permissibility of riding the train on Shabbos in New York.