History of City Eruvin − Part 1: The Eruv in Krakow

Introduction
The Jewish Town in Kazimierz near Krakow

In 1495 all of Krakow Jewry was banished by the King of Poland, Jan I Olbracht, to a section of the town called Kazimierz, a municipality with its own charter that was right at the doorstep of Krakow and which, by 1340, was encompassed by its own defensive walls. In the first half of the 17th century, a wall demarcating the Jewish quarter from the Christian quarter was erected. When Poland was partitioned for the third time by it’s conquerors in 1795, after which it ceased to exist as a state, Krakow and its surrounding areas were annexed by Austria. By 1800, the town of Kazimierz was incorporated into the city of Krakow. Under the Hapsburg rule of the Austro-Hungarian Empire, between 1815 and 1846, Krakow was briefly a free city of its own. The ramparts and the dividing wall between the Jewish and the Christian quarters were torn down. By 1846, the Republic of Krakow ceased to function and Krakow became part of Austria once again. At that time, some Jews were permitted to live in the Christian sections of Kazimierz and some moved into other districts of Krakow particularly Stradom, which adjoined Kazimierz by a bridge. In 1867, the Austrian parliament allowed greater autonomy for Galicia, Krakow was emancipated, and Jews were finally given permission to settle in Krakow proper.

Included in Krakow’s illustrious history of the Chief Rabbinate was the Rama, who was Rabbi from 1550 until his passing in 1572; the Bach from 1618-1640, and the Tosfas Yom Tov, from 1643-1654. Rav Shimon Schreiber-Sofer (the youngest son of the Chasam Sofer) was Rav from 1861 until his passing in 1883, after which Krakow was not to have a Chief Rabbi for another sixteen years. After Rav Sofer’s passing, his son-in-law, Rav Akiva Kornitzer, was selected by the Chasidim of Krakow as Chief Rabbi. However, since the board in charge of selecting a Chief Rabbi wanted a more liberal candidate, Rav Kornitzer couldn’t garner enough votes and was given the title of Ravad and not Chief Rabbi (HaMagid, Jan 28, 1892, number 4; Krakow-Kazimyez-Krakov: Mehkarim BeToldos Yehude Krakov, p. 171, and Sefer Krakow Ir Ve’em BeYisrael, p. 107).

One of the other contenders for the post of Chief Rabbi had been Rav Chaim Libush Horowitz (1851-1904, author of Tikkun Eruvin and Chayei Aryeh) whom the Chasidim disliked since they considered him too liberal as he had opened a school in 1877 in Krakow which also taught non-Jewish subjects. Nevertheless Rav Horowitz was very popular with the baalei battim and, in 1888, he was elected a Dayan and Moreh Tzedek in Krakow (ibid., and Me’ore Galicia, vol. 2 p. 203). After Rav Kornitzer’s passing in 1892, there was controversy once again regarding the post of Chief Rabbi, until Rav Horowitz was finally elected in 1899 (ibid., HaMagid, April 20, 1899, number 15, and HaMitzpeh, November 25, 1904, number 33).

Prior to WWII, Krakow’s Jewish population of 65,000 (out of a general population of approximately 250,000) was the third largest in Poland, after Warsaw and Lodz. [For the most thorough history of Jewish Krakow from 1304-1868 see Majer Balaban, A History Of The Jews In Cracow And Kazimierz, reprinted in Hebrew in 2002. See also Encyklopedia Krakowa, 2000 p.211, regarding the fortification of Krakow.]
The First Krakow Eruv
In a proclamation that was published in Krakow in 1892, there was a testimonial to an eruv from the times of the Rama and the Bach. Since Jews were not able to live in the other parts of Krakow, they relied on the walls of the Jewish quarters of Kazimierz (see below the map from Majer Balaban’s book of the walled Jewish quarters in Kazimierz, circa 1809). According to a letter in HaMagid (December 22, 1887, number 49) and HaZefirah (December 23, 1887, number 274) these walls had gates that were closed on Shabbos to allow carrying. [Rav Menachem Mendel Krengel (1847-1930, author of Toras Eruvin, Pleitas Sofrim and Devash VeChalav), a Moreh Tzedek in Krakow wrote a letter to Rav Shmuel Salant (Toras Rabeinu Shmuel Salant, vol. 1, p. 82) stating that there was an eruv, of tzuras hapesachim in Krakow for more than three hundred years (see also Toras Eruvin, p. 51). However, it’s more probable, as stated above, that they relied on the walls of the Jewish quarters and possibly used tzuras hapesachim only when necessary.] This was all until the year 1846 when Krakow became part of Austria again. At that point the Jewish quarter, which consisted of only a few streets, was bursting at its seams and the government allowed some migration into the non-Jewish areas of Krakow. As the walls at this time were mostly dismantled, it was necessary to erect tzuras hapesachim to enclose the areas where the Jews lived (ibid., HaMagid and HaZefirah).
Next: The Second Eruv of Krakow
l 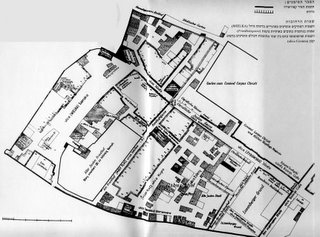 A map of the walled Jewish quarters in Kazimierz, Krakow (circa 1809). By default, the eruv was comprised of the walls surrounding the neighborhood.
at December 22, 2005