Part 2: The Truth About Warsaw

Many statements regarding the population of Warsaw have been tossed around e.g. that the Vistula River divided the population of Warsaw and therefore there was no shishim ribo on either side of the river. This is all fiction; the larger side, which was called Warsaw, contained a population greater than 600,000 by the year 1900. The smaller side, known as Praga, contained a population of approximately 66,000. This information was published in Rocznik Statystyczny Warszawy 1921 i 1922, 1924 p. 14, see copy below. For more about Warsaw see Part 1: The Truth About Warsaw.

[Even Rav Moshe zt"l acknowledged that Warsaw’s population was greater than 600,000. The reason Rav Moshe formulated his chiddush in shishim ribo (that there would need to be a population of 3,000,000 over twelve mil by twelve mil in order for that area to be classified as a reshus harabbim) was because he realized that there were European cities (Igros Moshe, O.C. 4:87), such as Warsaw (ibid., 5:28:5), whose populations were greater than 600,000 and nevertheless eruvin had been established there. Therefore, to say that the criterion of shishim ribo (600,000) is dependent on a city goes against the established minhag.]
i 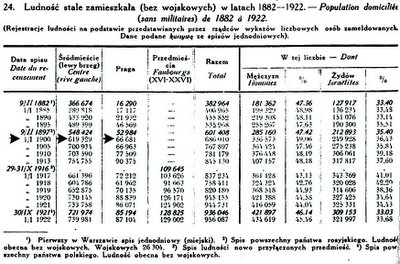