Continued from Why Brooklyn Is Not a Reshus HaRabbim part: IIa

The statistical records of the Department of Transportation [DOT] show that Ocean Parkway, one of Brooklyn’s main thoroughfares, has fewer then 55,000 vehicles traversing it daily in both directions [with an average of 1.5 occupants per vehicle (NYSDOT, A Transportation Profile of NYS, 2004 p. 4)]. Therefore, even Ocean Parkway, the largest thoroughfare included in the parameters of the eruv, would not pose a problem for the establishment of an eruv of tzuras hapesachim. Some claim that since Ocean Parkway merges with other roadways, the collective traffic should be factored into the total count. Consequently, since almost all roads are connected at some point, they would then all be considered as one roadway. Following this illogical line of reasoning further, it would be impossible to erect eruvin in any city because all roadways would have, collectively, shishim ribo traversing them.

More so, this issue is a moot point according to most poskim since Ocean Parkway doesn’t continue straight [mefulash u’mechuvanim] into these other roadways and they are therefore not halachically considered as one. Furthermore, Hagaon Harav Moshe Feinstein zt”l maintained that in order for any section of an intercity road to be considered a reshus harabbim, shishim ribo would have to traverse that particular section of the road on a daily basis (Igros Moshe, O.C. 5:28:16.). Accordingly, we would not include vehicles entering the roadway at different points in the total count, as they are each traveling along different segments of the roadway. Since Ocean Parkway has much fewer than shishim ribo traversing it at any point, there is no question that Rav Moshe would not classify it as a reshus harabbim. Additionally, the poskim maintain that people traversing the road in both directions are only counted traveling in one direction and so the total for a roadway like Ocean Parkway is actually much less (Kuntres Tikkun Eruvin Manhattan, p. 108; Kinyan Torah, 4:40:7, and Rechovas Ha’ir, 23:2). Hence, we can conclude that Brooklyn does not have a street that has shishim ribo traversing it.

[Even more so, most poskim maintain that the occupants of cars are not tallied in the shishim ribo (see Are a Vehicle’s Occupants Included in the Shishim Ribo?).]

Since Brooklyn does not meet at least two of the four requirements of a reshus harabbim, an eruv of tzuras hapesachim can be erected. 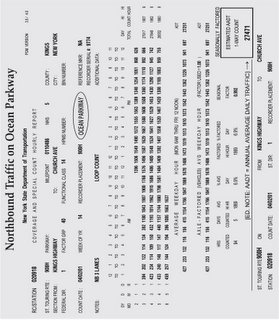 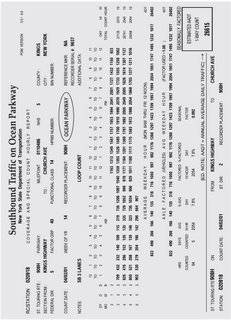 These statistical records from the DOT show that Ocean Parkway, one of Brooklyn’s main thoroughfares, has fewer then 55,000 vehicles traversing it daily in both directions [with an average of 1.5 occupants per vehicle (NYSDOT, A Transportation Profile of NYS, 2004 p. 4)]
at January 30, 2006