History of City Eruvin − Part 3: The Eruv in St. Louis

The First City Eruv in North America – St. Louis 1894
The first mention of a city eruv in America[56] was in 1894, in regards to St. Louis.[57] Shortly after Rav Rosenfeld came to St. Louis, he set to work on establishing an eruv for the city.[58] However, before Rav Rosenfeld published his arguments for the eruv in 1896, Rav Jaffe wrote an opposing argument on January 9, 1894,[59] based solely on Rav Rosenfeld’s public suppositions.[60] Rav Jaffe then had his sefer Sho’el Ka’inyan published in Yerushalayim in 1895,[61] and included this teshuvah regarding eruvin among other teshuvos.
The Controversy
Rav Jaffe stated in his introduction to his teshuvah[62] that a rav [Rav Rosenfeld] who had recently come to St. Louis allowed carrying on Shabbos based on empty premises. He claimed that Rav Rosenfeld had built an entire framework of leniencies that would permit carrying on Shabbos in all American cities.[63] Rav Jaffe continued that violators were rampant in this generation and those in America would hang on to his coattails, arguing that the power of permissibility is preferable. He declared that since this issue concerned the entire America, how could we be assured that there would not be other rabbanim who would learn to invent heterim in order to placate the masses and to gain favor in their eyes. In the same vein, he predicted, these people would pride themselves that Rav Rosenfeld would find them a heter to allow their stores to be open on Shabbos through its sale to the non-Jewish workers. The state of Orthodoxy in America was so weak, Rav Jaffe declared, that the observant only sought leniencies while the non-observant Jews did what their hearts desired. Meanwhile, [by allowing all these heterim] he claimed, the Shabbos would be violated by the few extant observant Jews, and its essence would be altogether forgotten. Consequently, Rav Jaffe stated, he was compelled to publicly declare that all of Rav Rosenfeld’s empty premises for establishing an eruv were in error. He went on to say that he had related his misgivings regarding Rav Rosenfeld’s leniencies to many rabbanim in America, and they had answered justly, but that Rav Rosenfeld’s supporters claimed that these rabbanim were not of Rav Rosenfeld’s stature. Therefore, Rav Jaffe declared, he was left with no choice but to publish his rebuttal and to present it to the gedolim of Eretz Yisroel; if they would agree with him, the G-d fearing Jew would surely abide by their rulings. 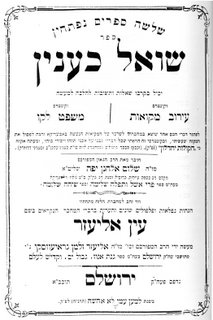 Title page of Rav Jaffe’s sefer where he refutes the validity of the St. Louis eruv and defends the kashrus of his mikveh.