History of City Eruvin − Part 4: The Eruv in Krakow

The Underpinnings of the Controversy
As mentioned in the introduction to this series, the opposition to Rav Chaim Libush Horowitz began with his founding of a school in Krakow, in 1877 that also taught secular studies. The Chasidim considered this method of schooling too liberal and opposed Rav Horowitz’s candidacy for the office of Chief Rabbi of Krakow (see Gershom Bader, Mayne Zichroynes, p. 94 and Me’ore Galicia, vol. 2 p. 203). This opposition to Rav Horowitz carried over to many issues that Rav Horowitz proposed (Mayne Zichroynes, p. 94; HaMitzpeh, October 26, 1906, number 43, and Kovets Kerem Shlomo, 1979, number 6); however, the issue of the eruv was the most fiercely contested (HaMitzpeh, November 25, 1904, number 33 ─ see below ─ and October 26, 1906, number 43). Rav Yehuda Leib Grubart (1862-1937) author of Chavalim BaNe’imim singled out in his Sefer Zikaron (p. 167) the controversy regarding the eruv in Krakow as being particularly fierce. Since eruvin more than any other issue vests a certain amount of centralized power to the baal ha’machsher, a city eruv is the most palpable symbol of power that a rav could have. Townsfolk publicly carrying in Rav Horowitz’s eruv would have been indicative of his influence and support in the community, unlike other more private issues. Therefore, the establishment of an eruv by Rav Horowitz elicited a disproportionate amount of hostility. Rav Horowitz’s main antagonist regarding the eruv was the Chasid Rav Krengel, the author of Toras Eruvin (Me’ore Galicia, 4 p. 627).

Analysis of the Halachic Debate
Even a cursory analysis of the available material demonstrates that the hostility towards Rav Chaim Libush Horowitz’s eruv was on more of a personal level then a halachic one. The tone of the rhetoric levied against Rav Horowitz by Rav Krengel illustrates this point succinctly. However, since the halachic debate was principally regarding the facts on the ground, it is impossible at the present time to establish the veracity of the facts presented by each side of the debate. However, there are some important points that can be discerned from these teshuvos.

Additionally, Rav Krengel’s claim that he was informed that the karpeifos of Warsaw were completely enclosed so no evidence could be inferred from the dayan Rav Klepfish’s letter is suspect. One of the Dayanim of Warsaw, Rav Nossan Shpigelglass (1798-1873), attests to the fact that they were lenient in Warsaw regarding the pirtzos of the karpeifos (Meoros Nossan, siman 8:19) so in fact it seems that the karpeifos were not entirely enclosed.

In closing, even though Rav Horowitz was relying on many kulos in hilchos eruvin to form his eruv (many of them which were used in Europe), as Rav Avrahom Aharon Yudelovitz (1850-1930) put so succinctly (Bais Av, 2:9:4), it is easier to be a critic then to be a author and Rav Krengel’s method of collecting all the stringencies in hilchos eruvin is not the way of the poskim.
Next: Part 1: The Eruv in St. Louis 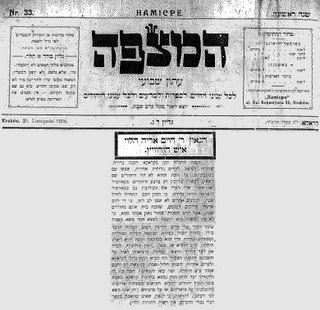 Part of the obituary for Rav Chaim Libush Horowitz published in HaMitzpeh (November 25, 1904, number 33) that refers to the controversy of the eruv.

Epilogue: When Rav Yosef Nechemia Kornitzer (1881-1933) became the Chief Rabbi of Krakow in 1925, one of the responsibilities that he undertook was the eruv in Krakow (Teshuvos V’Chiddushei Rabeinu Yosef Nechemia, p. 12; see also Rav Yechezkel Besser’s Min HaEvar El HaAsid, p. 227). While it seems that there were some tzuras hapesachim added at the time, ironically, they were definitely using some of the same parts of the city’s existing structures (such as the riverbanks of the Vistula) for the parameters of their eruv as Rav Horowitz had utilized (Teshuvos V’Chiddushei Rabeinu Yosef Nechemia, p. 22). At this time even the Chasidim were utilizing the Krakow eruv (see image below) since Rav Kornitzer was a Chasid. 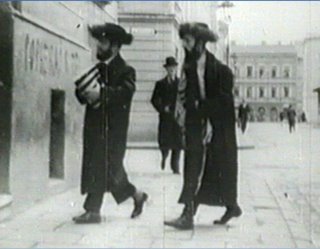 This image captured from the film Jewish Life in Crakow (1939; see here) shows a Chasidshe man carrying his talis to shul Shabbos morning (according to the narrator).