History of City Eruvin − Part 2: The Eruv in Krakow

As stated in Part 1, by 1846 the walls of the Jewish quarters were mostly dismantled and it was necessary to erect tzuras hapesachim to enclose the areas where the Jews lived. In 1867, the Austrian parliament allowed greater autonomy for Galicia, and Krakow was emancipated, Jews were finally given permission to settle in Krakow proper. At this point only the Jews who lived in the old Jewish quarters of Kazimierz had the use of an eruv since the authorities did not permit them to include the other sections of Krakow.

Rav Chaim Libush Horowitz writes in his introduction to Tikkun Eruvin an account of what occurred afterwards (a letter in HaZefirah, December 23, 1887 number 274 [see below] and HaMagid, December 22, 1887, number 49 confirm this account). He states that the need to enclose the whole city with an eruv was great and the lack of one caused tremendous chilul Shabbos. Rav Horowitz continued that a year before he published his kuntres (1887) he analyzed the parameters of the city and realized that with the existing structures on the outskirts of the city there would only be the need to erect approximately eight tzuras hapesachim in order for the whole city to be encircled. However, at that time unbeknownst to him someone asked the civil authorities for permission to erect tzuras hapesachim outside of the Jewish quarters on Dietla street (this street sits on what used to be a branch of the Vistula River that demarcated Kazimierz from the rest of Krakow but was filled in around 1878-1880 and Dietla street was built upon it). The answer was a resounding no. All the entreaties from the head of the Jewish community fell on deaf ears. The authorities then began an investigation regarding the whole issue of eruvin and were told that in other large Galician towns eruvin were not allowed (Vienna, Prague, Lvov and Budapest; it’s interesting to note that when Vienna and Lvov established eruvin they also had to rely on existing structures to enclose the city). The authorities then demanded that the eruv be dismantled in the old Jewish quarters as well.

Rav Horowitz then states that that all his earlier work was in vain since at this point the government would definitely not have allowed the required tzuras hapesachim to be constructed. However, he states that B”H the military that summer (1887) erected new ramparts upon which they built tracks for trains and with these fortifications the city was then completely encircled with mechitzos. After consultation with other rabbanim of the city they concurred with his halachic ruling for an eruv for the whole Krakow. 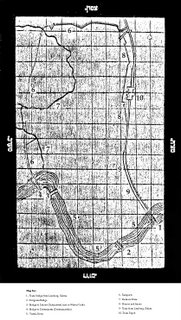 This map of the boundaries of the Krakow eruv was published in Rav Horowitz’s sefer, Tikkun Eruvin (there is a similar map in Toras Rabeinu Shmuel Salant, vol. 1, p. 84). 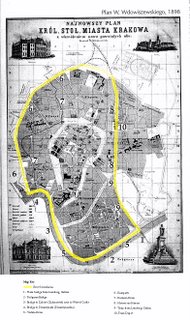 Rav Horowitz then goes on to outline the halachic basis for his eruv in his sefer, Tikkun Eruvin (teshuvah 1-4, 9-11). He explains the heter of using riverbanks as walls and if the Vistula riverbanks are halachically sufficient. He then expounds on why it did not concern him that a river might later be obliterated by sediment and the concern that the river might freeze. He adds that since there are bridges connecting the other side of the Vistula River that even if the riverbanks on the Krakow side are not sufficient the riverbanks of the opposite side can be used as well. He then goes on to explain why there was no problem of karpeifos (an area larger then five thousand amos which can halachically be problematic since it is not designated for human habitation). He explains as well the rectifications of the pirtzos (such as the bridges and the roads that bisect the mechitzos) by utilizing the city gates at these openings (delasos) and his addition of a korah (pole) under the telegraph wires to removed the problem of tzuras hapesaech min hatzad. Rav Horowitz later published in his sefer, Chayei Aryeh (1890) an additional teshuvah (siman 18). He states that by the summer of 1888 there were a few facts on the ground that changed particularly regarding the Podgorze Bridge (number 2 on the maps above) and details his heter for the bridge.

Next: The Controversy
l

This letter in HaZefirah (December 23, 1887, number 274; a similar one was published in HaMagid, December 22, 1887, number 49) confirms the account regarding the eruv of Krakow as told by Rav Chaim Libush Horowitz in his introduction to Tikkun Eruvin.
at January 18, 2006

Anonymous said...
This comment has been removed by a blog administrator.
11:40 AM

But what did r Yosef Engel who was av bes din of Krakow hold? What was his position? I know one of his many sedarim is on eiruvin, don't know if it's one of the ones that survived the war.