Part 1: The Truth About the Satmar Rebbe and a Williamsburg Eruv

Part of an ongoing commentary on the bias against city eruvin.

One of the recent controversies regarding eruvin has been the establishment of an eruv in Williamsburg. This eruv is not the first one to have been erected in Williamsburg; one was previously established in 1981 by the Ratzferder rav (see below). In order to prove that the Satmar rebbe zt”l was against establishing an eruv in Brooklyn, the anti-eruv group published a work full of inaccuracies and half-truths titled Yalkut Michtavim (first edition 2002, second edition 2003). Over the past few years this book has grown in stature despite the fact that a book was published to refute it (Chai Anochi LeOlam), and it is quoted as an authoritative source of the Satmar rebbe’s opinion regarding eruvin. According to the Yalkut Michtavim, the Satmar rebbe was extremely resistant to an eruv in Brooklyn, on par with his strong feelings regarding all matters critical to the continuation of yidishkeit. This actually is the most damming evidence against this book. The fact is the Satmar rebbe, who was never known to mince words, did not write or publicly state that he was opposed to an eruv in Brooklyn. If the Satmar rebbe’s antipathy towards a Williamsburg eruv was as intense as this book would have us believe, the Satmar rebbe would have written at least one letter regarding his opposition to eruvin in Brooklyn just as he wrote regarding all other critical matters? Additionally, all members of the Hisachdus Harabbanim supported the Ratzferder rav’s eruv in Willamsburg (this eruv was immediately destroyed by some kanaim) and granted letters of support between the years of 1972-1981 (Otzros Yerushalayim, 298-300 and Al Mitzvas Eruv, p. 159-194). These letters were written by the most respected members of the Hisachdus Harabbanim who knew the rebbe’s opinion better than all the contemporary rabbanim and who would not go against his wishes. They are testimony that the rebbe was not opposed to an eruv in Williamsburg. More so, these letters were published during the lifetime of these rabbanim and there was never a retraction from any of them. When the anti-eruv group is confronted with these letters, they claim that all the rabbanim withdrew their support after they learned of the rebbe’s opposition (Yalkut Michtavim, p. 59-69). My question to these tale spinners is this: when did these rabbanim learn of the rebbe’s opposition and when did they retract their support for an eruv in Williamsburg? According to the anti-eruv group, the Satmar rebbe had already voiced his extreme opposition to a Williamsburg eruv by 1950 (Yalkut Michtavim, p. 26; see also the account below). Wouldn’t these rabbanim have known the Satmar rebbes’s opinion regarding eruvin in 1972-1981 when they showed their support for the Ratzferder rav’s eruv? More so, the Sharmasher rav, who knew of the Satmar rebbe’s opposition to a Manhattan eruv in 1966 (HaPardes, 40th year, vol. 8), gave a letter of support for a Williamsburg eruv in 1973 (Al Mitzvas Eruv, p. 163). Why would the Sharmasher rav retract his 1973 letter after he was already apprised of the Satmar rebbes opinion regarding eruvin in 1966? Wouldn’t the Sharmasher rav have known the Satmar rebbe’s opinion regarding eruvin better than the contemporary rabbanim?

The fact is many Satmar Chassidim know the truth that their rebbe was not opposed to an eruv in Williamsburg and that he definitely did not subscribe to Brooklyn being a reshus harabbim.

Some are under the impression that if the Satmar rebbe had wanted to establish an eruv, he would have done so himself. However, they do not realize that until 1985 ― when the court decided that it was permissible for the city to allow the Manhattan Beach eruv ― the legality of erecting eruvin was uncertain. Erecting tzuras hapesachim for city eruvin up until that time was more complicated then one would believe. It is evident that when Rav Chaim Michoel Dov Weissmandel zt”l wanted to establish a Williamsburg eruv in 1949-51, he tried to utilize as many existing structures as possible in order to minimize the need for tzuras hapesachim (see his maps on p. 149-51 in Chai Anochi LeOlam).

The method employed by all the anti-eruv campaigns has been to use all available means to obstruct eruvin, even from contradictory sources, as long as the end result would be no eruv. This book is a perfect example of this phenomenon. Many of the narratives are based on anecdotes that were pieced together to form one coherent account and this is why the stories do not always follow chronologically. If one were to read it with a critical eye, one would find that it is full of fictional tales concocted way after the fact, and that the dates do not jive (some examples were mentioned above). One of the fundamental accounts quoted in this book illustrates how they fabricated these tall tales but messed up on factual details, which, we will see, proved to be this tale’s undoing.

I will quote the pertinent points and for the readers edification I will post a facsimile of the complete account below. They state (Yalkut Michtavim, pp. 34-35) that many people claimed to have heard the following story from Rav Avraham Chaim Spitzer shlita. In the year 1949 or 1950, the Satmar rebbe was at a bris in the Yeshivah of Nitra. Later the Satmar rebbe locked himself in the Yeshivah’s seforim room with Rav Chaim Michoel Dov Weissmandel and debated the merits of a (Williamsburg) eruv the entire night. Rav Spitzer relates that at approximately three o’clock he awoke and overheard the discussion. After some debate regarding a Tosfos in Eruvin, the Satmar rebbe declared that he would never permit an eruv here (Williamsburg) since roughly sixty years ago an eruv was established (in Manhattan by Rav Yehoshua Seigel zt”l) with approbations from Gedolei Yisroel that utilized bridges (elevated train tracks). These elevated tracks were later demolished, but nevertheless people continued to carry (in Manhattan). Following this, the Satmar rebbe repeated that he would never agree to an eruv here (Williamsburg).

Dear reader, this story is fiction. Rav Seigel utilized the natural riverbanks for three sides of the boundaries of the eruv and on the fourth side, the Third Avenue El. The only mechitzah that the Satmar rebbe could have been referring to that was later demolished was the Third Avenue El. However, the Third Avenue El was not demolished prior to 1950 as this story charges but actually August 3, 1955, as reported by the New York Times (see below; see also The Subway, p. 249). This is clear evidence of the speciousness of the stories contained in Yalkut Michtavim.

As the anti-eruv group has shown time and time again, they couldn’t care less about the details because their most important objective is to negate the eruv; it is therefore explicable that a cursory reading of the particulars would suffice for them. These are some of the possible sources that led them astray.

In closing of this post I think the most appropriate words are from the Satmar rebbe himself, “Many things are said in my name publicly that I never said and that I would not have thought of saying (introduction to Al HaGe'ulah Ve’al HaTemurah).” The authors of Yalkut Michtavim should have considered the Satmar rebbe’s words before they produced this work of fiction in his name.

A facsimile of the pages 34-35 from the book Yalkut Michtavim alleging that the Third Avenue El was removed prior to 1950. 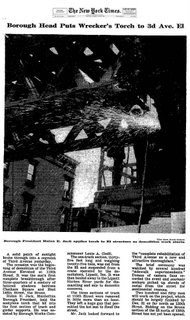 This article from the New York Times, August 3, 1955 proves that the Third Avenue El was removed subsequent to the claim in the book Yalkut Michtavim.
at June 15, 2006