History of City Eruvin − Part 1: The Eruv in St. Louis

The Jewish Community of St. Louis

St. Louis’s Jewish history dates back to at least 1807 when Joseph Philpson, the earliest known Jew, settled there.[1] The first documented minyan was formed in 1837,[2] and by 1841, it had organized under the title United Hebrew Congregation.[3] In 1879, the oldest extant Orthodox congregation, Beth Hamedrosh Hagodol, was organized,[4] and in 1886, one of the most influential Orthodox congregations, She’eris Sfard, was established.[5]

In 1854, United Hebrew Congregation hired the first documented rabbi to serve in St. Louis, Rav Yissachar Dov Illowy (son of Yaakov Leib) who was born in Colin, 1814. His term of service lasted about one year, and in 1856, he left for Syracuse. He passed away on June 21, 1871.[6]
Another well known rabbi who served the St. Louis Community was Rav Shalom Elchanan Jaffe (son of Shimon Peretz) who was born in Vabalninkas (Vilnius Gubernia), 1858.[7] At the young age of 14, Rav Jaffe was learning in Yeshivas Volozhin, and when he was 19 years old, he received smicha from Rav Yitzchok Elchanan Spektor of Kovno, Rav Naphtali Tzvi Yehuda Berlin of Volozhin, Rav Refael Shapiro of Volozhin, Rav Shlomo HaKohen of Vilna, Rav Moshe Shapiro of Riga, Rav Yitzchak Yaakov Reines of Lida, and Rav Yosef Schlifer of Slonim. In 1879, he was invited to serve as rav of Upyna,[8] and from 1884-87, he served as rav of Zeimelis.[9] His stay in Zeimelis was marred by a dispute,[10] and by September 7, 1887, he left Europe, arriving in Chicago via New York.[11] By November of 1887, he was appointed as the unofficial Chief Rabbi of the St. Louis Orthodox Jewish Community[12] and served as the rav of Congregation She’eris Sfard.[13] Rav Jaffe’s stint was tumultuous[14] and a short time afterwards, he accepted an offer to be rav in his home town, Vabalninkas, where he served for about a year.[15] By 1891, he had returned to St. Louis,[16] and later that year, he was appointed the rav of Beth Hamedrosh Hagodol.[17] Rav Jaffe’s second stint in St. Louis was no less chaotic[18] than his first appointment had been, and some time later, in 1895, he left Beth Hamedrosh Hagodol.[19] By 1897, he was rav of a splinter minyan of She’eris Sfard[20] but left later that year[21] to serve as rav of Congregation Beth Hamidrash in Brooklyn, NY.[22] His stay in Brooklyn was marred by a feud,[23] and after the passing of the Chief Rabbi Yaakov Yosef Joseph in 1902, Rav Jaffe assumed his position as the rav of Beth Hamidrash Hagadol.[24] This prestigious position was Rav Jaffe's final one until his passing on November 15, 1923.[25] Additionally, Rav Jaffe was one of the founding members of the Agudas HaRabbonim and served at times as president and honorary president.[26] Rav Jaffe authored the following seforim: Peri Eshel, 1877, Siddur Tefila Shelema, 1886, Sho’el Ka’inyan, 1895, Teshuvah KaHalachah VeDivrei Shalom, 1896, and Siddur Sicha Shelema, 1896. 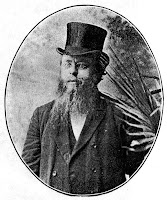 Another renowned rabbi who served the St. Louis Community was Rav Zechariah Yosef Rosenfeld (son of Moshe Gavriel) who was born in Turisk (Volhynia Gubernia) in 1847.[27] By 1870 he was already a rav in Kovel,[28] and by about 1879, he had assumed his father’s position as rav in Turisk.[29] Rav Rosenfeld was revered by the citizenry of Kovel and Turisk not only for his Torah scholarship but also for his knowledge in medicine.[30] Because of Rav Rosenfeld’s clandestine activities on behalf of his fellow Jews, he ran afoul of the authorities and had to flee Turisk.[31] He set out for America in 1893,[32] spent a short period of time in New York and then in Baltimore.[33] By early 1894 Rav Rosenfeld was elected rav of the United Orthodox Community [Agudas HaKehilos] of St. Louis.[34] He filled the position of rav over different periods of time for these congregations: Bnai Yackov,[35] Bnai Binyamin,[36] Tifereth Israel,[37] Beth Abraham,[38] and his central post, the Congregation She’eris Sfard,[39] where he served from 1897 until his passing on September 9, 1915.[40] Additionally, Rav Rosenfeld was one of the founding members of the Agudas HaRabbonim and in 1906 served on the Vaad HaKashrus.[41] Rav Rosenfeld authored the following seforim: Tikvas Zechariah, vol. 1 1894 and vol. 2 1896;[42] Yosef Tikvah, 1903, and Zichron Zechariah, 1916. 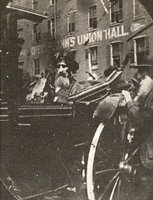 Lately, I see that some are trying to prove that Chabad was opposed to eruvin in large cities by citing the fact that Lubavitcher Rabbonim ...